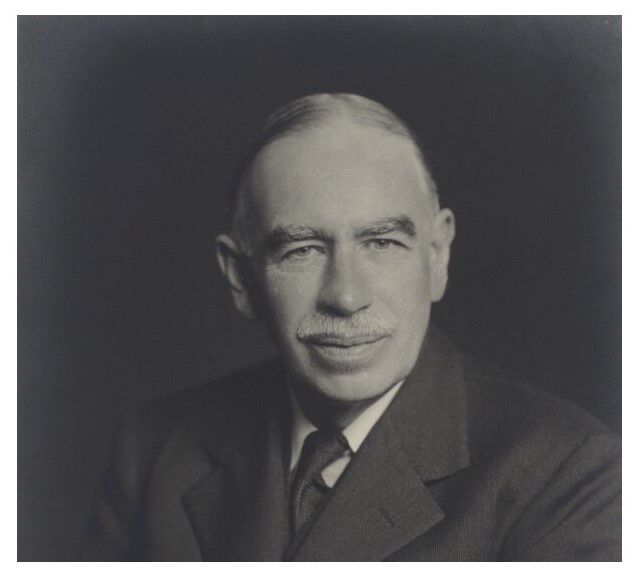 The following submission is a repost by one of our Symposium seminar leaders, Reynaldo Miranda. We hope you enjoy!

I recently ventured to participate in a Symposium study of the essay “The End of Laissez-Faire” by John Maynard Keynes (English, 1883-1946). Keynes was an old Etonian, a Cambridge Apostle, and president of the Union.  His father was a distinguished fellow of Pembroke College, and his mother, also a Cambrian, was the first madam councilman of Cambridge and mayor of the city.  It is no surprise, then, that Keynes deploys a lively, playful and welcome wit in this five part essay of about ten pages.  His rhetoric is placed at the service of his argument, and it helps us see the argument.

For instance, in the second section he proposes a provocative allegory of a herd of hungry giraffes in order to illustrate the notion of laissez-faire economics. Keynes employs the allegory in such a way as to clarify the interweaving of libertarian economic ideology and Darwin’s random selection theory and the survival of those that happen to be fittest in an ecosystem.  Several of my colleagues during the seminar offered comment thereupon that brought to mind the peril of over-selection, as in the case of thoroughbred Arabian race horses—too narrow and selective a breeding eventually aggravates genetic weaknesses and vulnerabilities (i.e. the royal cousins who marry one another across generations).  Not dissimilarly, economists know that just as there can be too little competition, there can also be too much, and that both the insufficiency and excess are harmful and undesirable.

But I wish to attend to another element in the essay.  Most of the time we habitually (without any thought in the matter) take for granted that words and phrases stand still as it were, that is to say that definitions endure.  How untrue to a sufficiently sustained experience!  Keynes traces the shifting use of the term laissez-faire, and the changing contexts and grounds in which the phrase is intelligible.

To summarize: the first spoken use of the phrase in common memory is by the French merchant Legendre replying to the royal minister Colbert at the end of the 17th C.  Colbert had asked how the government could help him.  The plain answer is as old as man, “let [me/]us be.”  The first written use was the Marquis d’Argenson about 1751, though we could not make this attribution until his works were published under his own name in 1858.  Note that the phrase, both spoken and written, originates in the capitol of France, hardly a laissez-faire economic regime now, and still much less so then.  It does not arrive in English until Benjamin Franklin and Jeremy Bentham, neither of whom were economists.  The phrase is never used in the voluminous works of any of the earliest economic writers—not in the Physiocrats, Adam Smith, Robert Malthus, or David Ricardo.  The phrase is taken up as a convenient slogan, a rallying cry, by a certain strand of the Utilitarians, the so-called Manchester School and Benthamite Utilitarians, whence it trickles down to secondary economics textbooks, and popular, mass education textbooks (e.g. Archbishop Whately’s Easy Lessons for the Use of Young People of 1850)—hardly the stuff of scholarship in political economy.  A very few economists, some of them otherwise eminent, wax rhapsodic over laissez-faire as article of faith.  Keynes mentions the important, French economist Frederic Bastiat in his Harmonies Economiques of 1850, who begins, “I believe…” Marx made much fun of Bastiat’s enthusiasm. Still, that enthusiasm was carried on by some members of the Austrian School, and into our own days the Chicago School.  We see then a phrase first given currency by Locke as a reaction against absolute monarchy and established church and put at the service of a greater enfranchisement, become a century-and-a-half later a “dogma [that] had got hold of the educational machine; it had become a copybook maxim.  The political philosophy, which the seventeenth and eighteenth centuries had forged in order to throw down kings and prelates, had been made milk for babes, and had literally entered the nursery.”

It is worth noting that politics is prior, certainly in time, to economics, and that laissez-faire, like capitalism itself, is a temporal phenomenon—there is nothing “natural” necessarily about it:  Before capitalism, Western societies organized themselves along feudal lines, and before that along mastery-slavery lines.  Indeed toward the end of the essay Keynes says, “In Europe, or at least in some parts of Europe—but not I think, in the United States of America—there is a latent reaction somewhat widespread, against basing society to the extent that we do upon fostering, encouraging, and protecting the money-motives of individuals.”  The great difference in perspective of which Keynes is well aware, and to which alludes in passing, arises from this: we here in the USA have only ever had capitalism, pretty much, and have never had kings or prelates.  The way of the cowboy and entrepreneur is almost all we know, and can therefore seem natural to us.  In Europe the state, the bureaucracy, the king’s court, noblesse oblige, shared traditions, the communities are of far greater import than over here.  There is a very humorous and great novella entitled Michael Kohlaas by Heinrich von Kleist (1777-1811) based on a real incident in 16th C. Saxony.  The title character is a plain, simple, honest, hard-working petit bourgeois who comes up against the Prussian imperial state and aristocracy, where he is totally out of his world, and where he doggedly insists upon what seems right to his ethos and refuses any accommodation or compromise, which just dooms him all the more deeply.  Straightforward mercantile transactions are all he had ever known, not imagining a sophisticated world of reciprocal favors at the German courts.

Yet there is more the curious afterlife of this slogan: Though later “economists no longer have any link with the theological or political philosophies out of which the dogma of social harmony was born,” they, “like other scientists, have chosen the hypothesis from which they set out, and which they offer to beginners because it is the simplest, and not because it is nearest to the facts.  Partly for this reason, but partly, I admit, because they have been biased by the traditions of the subject” they conveniently start from this laissez-faire assumption.  “The beauty and the simplicity of such a theory are so great that it is easy to forget that it follows not from the actual facts, but from an incomplete hypothesis introduced for the sake of simplicity.”  No wonder then that we are saddled with “the general opinion that an individualistic laissez-faire is both what they ought to teach and what in fact they do teach.”  This opinion proliferates in the mass media and among laymen.  Aristotle, as far as we know, first pointed out that small mistakes early on compound, and can lead to many and great mistakes later—think of a wrong map, or series of instructions.  Because professors of economics privilege laissez-faire for the sake of being comprehensible to their freshmen students sitting in large lecture halls, this common sense notion enjoys an unearned presumption in its favor, and all the heavy qualifications, complications, and exceptions that are revealed to the students later come to be seen as if they were, unnatural, not ideal, unhealthy “diseases.”

So even the student of economics can stand too close to the chalkboard as it were!  But a wide, adventurous, and ever more discriminating reading can teach him things that he did not already know or hold as opinions.  Keynes has shown that the notion we wish to understand better is not a still target but a moving one.  And its trajectory is upon reflection typical.  Someone, or some group of people, makes a discovery or invention and they name it.  At first the name is on a youthful, ennobling path, but like all things in our natural world that come to be and pass away, it peters out eventually and curves downward.  Think of the things that seemed so important in childhood, but were later left aside.  Not entirely, for as G. K. Chesterton quipped, “the child is the father of the man.”  Still, we may extrapolate and generalize from Keynes probing the history of laissez-faire.  And this is what I want to talk about in my next post: one of the names given to this sort of thing is “sedimentation” by Edmund Husserl on the analogy of plants letting their dead leaves fall along with those from surrounding growths, and at once nourishing and obscuring the vital roots.